Missie Osler is one of our most stalwart group members, though semi-retired having reached the grand old age of 16, she is still leading walks, making videos, and giving the London group the benefit of her managerial experience gained from many years of running rings around her two-legged pals. Here’s how she felt at the end of two long days in October, raising awareness and collecting funds at London’s train stations …

Always ready to help with a big grin on her face, after graduating (kind of) from puppy school, Cocoa Adkins-Dallmann has been helping to raise awareness at events and market stalls as well as undertaking treks such as the recent Animals Asia UK Snowdon Challenge to raise vital funds for her four-legged friends in Asia. She is also very skilled at tidying up leftover food and sweeping up crumbs.

My name is Jenga Holmes and I’m a long-standing supporter of Animals Asia. 2011 was a very busy year for me; I spent the spring convalescing from an operation, and then I moved to the country to live with my grandma. Luckily I was able to keep in touch with events via the internet and lend my support to many important campaigns. I’ve also been volunteering as a foot-warmer and early morning alarm call to raise awareness of the good work animals do for humans the world over. 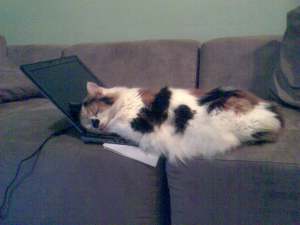 In loving memory of Felicity, 2001-2006, who was an inspiration to us all. Felicity’s spirit never waned, no matter how large the tomato. Here she performs her favourite party trick….